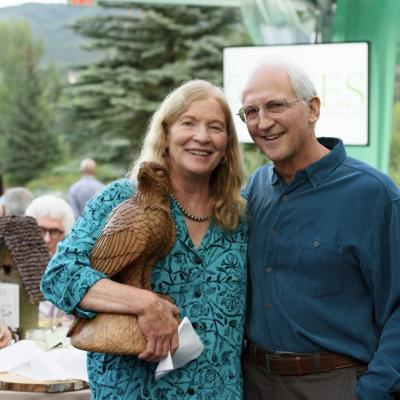 Tom and Jody Cardamone are being recognized together as the 2020 Enos A. Mills Award Recipient for their lifetime of achievements in environmental education, which include 37 years in leadership positions at the Aspen Center for Environmental Studies.

Elizabeth Paepcke founded the Aspen Center for Environmental Studies (ACES) in 1968. Elizabeth was inspired by her relationship with Enos Mills, and in turn, she was able to mentor Jody and Tom Cardamone. The couple first engaged with the fledgling organization when Jody was hired as its first executive director. Between 1975 and 2012, one or both of the Cardamones served as the executive officer of ACES. 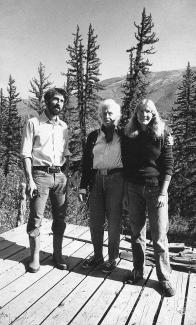 Under their guidance and vision, ACES grew from one site at Hallam to four sites along the Roaring Fork Valley. Jody's love of education combined with Tom's knowledge of natural history and keen business sense strengthened their ability to connect to the local community. Tom and Jody saw the big picture, created a vision, and worked to realize that vision. They served as living role models to all they meet demonstrating the value of nature to individuals, businesses, and communities.

The first challenge Tom and Jody faced was taking Elizabeth’s vision of ACES, blending it with their own ideas, and growing it into a young nonprofit. Establishing programs that met the interests of the local community was paramount. Jody believed strongly that environmental education was for everyone and she set out to prove it. In the process, she established community respect. This respect has continued to grow throughout the valley. A fun detail is that every young organization needs a logo and ACES was no exception. Jody drew the first logo for ACES and it is still in use today.

Currently, ACES conducts about 125,000 annual educational contacts. Of those, roughly 15,000 occur at the Rock Bottom Ranch, primarily for school programs. This site is special in that it focuses on agricultural and rural environments in an area surrounded by wild areas. Programs for students, including both in-class presentations and field trips, are now an established component of the district curriculum.

Additionally, the Cardamones built programs to engage adults and families within the community. Today, ACES reaches approximately 40,000 community members each year through its Naturalist Programs, which span a variety of types and locations. Walk-in visitors to the center at Hallam Lake are the simplest of these contacts. A guest lecture series, bird walks, and special events also occur at this site.

Providing an environment for mentoring emerging naturalists was also a goal of the Cardamones. College students and recent graduates are hired as summer and winter seasonals at ACES. They are trained and mentored to develop their interpretation and educational skills. They grow and enter the world as scientists, nonprofit leaders, interpreters, and more. Hundreds of young adults have started their environmental careers at ACES.

The prominence of ACES in the community of Aspen and the entire Roaring Fork Valley is testament to the leadership of the Cardamones. As for Tom and Jody, they continue to play an important role in addressing the environmental issues and concerns of the Roaring Fork Valley and beyond. They traveled to Japan to help host an environmental conference and have hosted park rangers from Malawi and Tibet to demonstrate how rangers can incorporate environmental education into their position duties. In 2018, Tom formed the Watershed Biodiversity Initiative to support a comprehensive and unprecedented Roaring Fork Watershed Biodiversity and Connectivity Study, https://www.watershedbiodiversityinitiative.org/. Data and analyses from these studies will inform decisions and life along the Roaring Fork for years to come.