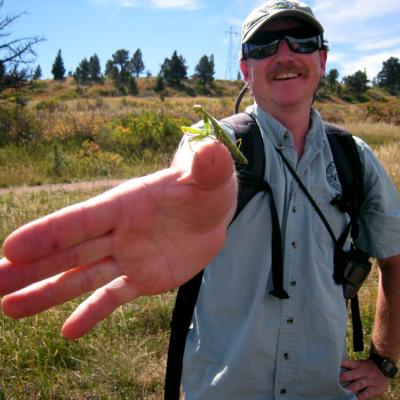 An incredible interpreter and a dear friend to many, Dave Sutherland began his career in CO at Boulder Mountain Parks in 1996. He had been training for the job since the age of 4, when he began collecting rocks and butterflies and drawing his own bird books with crayons. Dave earned a Bachelor’s degree in Biology from Pomona College and a Masters in interpretation (Sam Ham, one of the architects of modern interpretation, was his major professor at the University of Idaho). He served as a volunteer in the U.S. Peace Corps (Honduras) teaching fish culture; and did his senior honors thesis and Master’s thesis in Costa Rica living with native host families. Dave spent three years as the Head of Interpretation at the Charles Darwin Research Station in the Galapagos Islands. Here he helped write the interpretive plan for Galapagos National Park, trained naturalist guides, and worked with the local communities. He co-authored an illustrated textbook in Spanish, Galapagos – Nuestras Islas, for use in middle schools throughout the islands.

Over the past 23+ years working for the City of Boulder, Dave has left his mark on many aspects of the Open Space and Mountain Parks department. From logo, website, brochure, interpretive sign and photo database development to his Natural Selections nature programs, naturalist trainings, starting of the department’s volunteer native plant garden group and successful outreach programs for Spanish speakers, Dave’s contributions are many.

In 2005, he received the Enos Mills Lifetime Achievement Award from CAEE; in 2010, the Champion of Environmental Education Award from Thorne Nature Experience; in 2015, the City of Boulder Values Award for Innovation; and also, in 2015, the COSA Blue Grama Award for Excellence.